The word “documentary” can sometimes mean boring.  But Davis Guggenheim (An Inconvenient Truth) doesn’t know how to make a boring film – he is too passionate about his topics.  His latest creation, Waiting for ‘Superman’, is not a plodding lecture, but an emotional roller coaster far likelier to leave you weeping than sleeping. 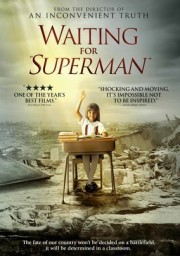 Family Friendly: Yes, but probably not engaging for children

The film is about the state of the American education system, not the superhero from the comics, and focuses on five students from LA, D.C. and New York who are trying to get an education.  Most of the kids are from poor areas where the local schools are more of a link to gang involvement and a drug addiction than a university diploma.  Rather than attend their local public schools, (classified as “dropout factories”) they know their only chance to keep from falling irretrievably behind is to get in to a charter school, where education is taken seriously.

The problem with our public schools, we come to realize, is not a lack of funding – practically every President since Ford has tried to increase federal spending on education – and it is not the oft-blamed issue of classroom size or student-to-teacher ratio.  The problem is poor teachers.  As a Stanford expert testifies, “a good teacher is what’s working; a bad teacher is what’s not working.”  But unlike virtually any other profession, public school teachers are guaranteed their jobs – irrespective of job performance.  Teacher’s unions and big-government bureaucracy have conspired to make it basically impossible to get rid of bad teachers.  As one teacher puts it, “I get paid whether you learn or not.”  Thus criminal neglect of the education of America’s children is protected by law and insulated from attack or reform.

Guggenheim presents different possible solutions to the problem, including the proven success of a recent innovation called charter schools.  Despite receiving public funding, charter schools can hire non-union teachers and hold them to high standards of performance.  They tend to be small and boast high success rates with their students, so every year they are besieged with many more applications than they have spots available.  The five children we have gotten to know and love over the course of the film are, at its end, subjected to a humiliating lottery system that will determine whether or not they are accepted, and seems sure to decide, at least in part, their chances for success in life.  It’s heartbreaking, and brutally unfair, but it’s what the American education system has become.

Guggenheim’s final plea is this: “Our system is broken, and it seems impossible to fix.  But we cannot wait.”  Many, including such luminaries as Bill Gates, have recognized this problem and are battling to solve it.  But they need our help.  What will we do to change our children’s lives? Δ