Editor Chris Robinson is a lifetime film fan from California. He is responsible for most of the site’s film reviews, as well as overseeing Cafe Dingo content in general. Don’t like the site? Blame him. Chris’s favorite films are The Shawshank Redemption and Hot Rod, and he rocks out to Keller Avenue in his car. 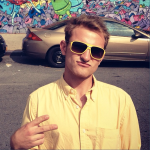 Contributor Cody Robinson oversees Cafe Dingo music content. A California native, he currently plies his trade in New York City, where he both writes and performs original music. Cody’s all-time favorite movie is The Notebook and he is currently obsessed with “undeniably brilliant” acts One Direction and Carly Rae Jepsen.

Contributor Stefanie Lee is Cafe Dingo’s resident TV expert. She grew up on California’s Central Coast and currently calls San Francisco home. A hopeless film addict first, she once blitzed through half the AFI Top 100 list in a single summer. Now she’s caught the the television bug–and, no, she never leaves her apartment, except to stock up on more chocolate babka to sustain her through many a Seinfeld rerun. She has previously written for TV.com, The Huffington Post, and The Daily Californian.

Contributor Ingrid Goatson is obsessed with the written word.  With a bachelor’s degree in Comparative Literature, a job selling books in a large independent bookstore in Boulder, Colorado, and as an active member of the book blogging community, she loves keeping up on anything and everything BOOKS. She wants to talk to you about what you are reading.