Sofia Carmina Coppola’s film career started out as an unmitigated disaster.  The year was 1990, and new Hollywood darling Winona Ryder was set to star as Mary Corleone in the third installment of Francis Ford Coppola’s epic “Godfather” trilogy.  At the last minute, Winona backed out, citing a nervous breakdown (cynics suspected she simply preferred to focus on concurrent project Edward Scissorhands instead).  Mr. Coppola panicked and asked Sofia to fill in, despite the fact that she had little acting experience and sported a thick Valley Girl accent.  The stopgap result was widely and vociferously panned, marking an inauspicious beginning for the film career of the Coppolas’ youngest child. 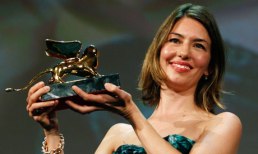 Born to Hollywood royalty, Sofia has been around the movies her entire life. Her father Francis is considered one of the best directors of all time, and her mother Eleanor is also a filmmaker and a writer (the two met on a film set). Her grandfather Carmine was a celebrated composer who created the soundtracks to many notable films, and her older brother Roman directs movies and music videos. Cousins Jason Schwartzman and Nicolas Cage are both respected actors (although one perhaps more so than the other).

From a young age, Sofia seemed destined for a career in the arts. Bit acting roles as a child led to the aforementioned turn in The Godfather: Part III (although Sofia claims she was never really interested in an acting career), and her enduring interest in fashion led her to an internship with Chanel at the age of fifteen. After high school, she briefly attended Oakland’s Mills College and then the California Institute of the Arts in Valencia before dropping out to start her own clothing line (called Milkfed, it is sold exclusively in Japan). A sometime model, she frequently posed for girl-oriented magazines such as YM and Seventeen throughout the 1990’s.

At the age of 27, Sofia directed her first film – a short called Lick the Star (1998). Critical successes The Virgin Suicides (1999) and Lost in Translation (2003) followed soon after. It was this final film, which garnered Oscar nominations for Best Picture, Best Director, and won for Best Original Screenplay, that announced her arrival as one of America’s most promising up and coming directors. Sofia followed Lost with two biopics: Marie Antoinette (2008) and the semi-autobiographical Somewhere (2010). Her next project, The Bling Ring is due out in 2013.  Starring Emma Watson, the film centers on a group of California teenagers who burglarize the homes of famous celebrities.

Admittedly, a cursory glance at Sofia’s Wikipedia page paints a picture of privilege and glamour; but her life hasn’t always been so glossy. When she was just fifteen, she lost her older brother – and best friend – Gian-Carlo in a boating accident. Unsurprisingly, the ordeal shook Sofia and the entire Coppola family to the core, and left them grasping for answers. “There are things in life you can’t understand” she now admits, when reflecting back on this girlhood tragedy. “There are all these things in life there’s no good explanation for.” This “is what [my films are] about. That things happen for which there are no reasons. And if you try to find them, you won’t.”

This ‘lack of answers’ motif pervades much of her work, as do themes of loneliness, isolation, and alienation. She seems haunted by life’s randomness, its unfathomable injustice. It is true that her film’s can be polarizing: it seems you either love her work or hate it, with not much middle ground. Fans find solace in her inimitable ability to conceptualize loss and withdrawal, while critics find her work self-indulgent.

Elaborates Slate.com‘s Nathan Heller: “With their dreamy self-absorption, flickers of romantic transcendence, and fabulous indie-rock soundtracks, Coppola’s movies seem to come as missives from some never-ending sophomore fall, a kingdom ruled by moody young folks who have read Rousseau but never seen the inside of a tax return.”

Sofia currently lives in Paris, with her husband, French rocker Thomas Mars (they wed in 2011) and their two children Romy (6) and Cosima (2). (She divorced former husband Spike Jonze in 2003). Whether she is capable of making films as deeply powerful as her father’s greatest work remains to be seen. But that Sofia Coppola has emerged as one of cinema’s brightest young directors seems beyond debate.  Δ

Coppola Trivia: Baby Sofia also appears in The Godfather (I); she plays the infant boy in the christening scene