Tré!, the final chapter in Green Day’s three-album series, is about to hit stores, as well as the bottom of your trash can (should you be foolish enough to actually go out and buy it). 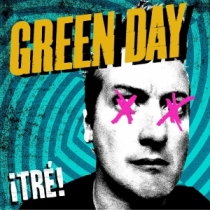 With the band in their forties (drummer Tré Cool turns 40 December 9th) and President Bush out of office for years now, it seems they’ve simply run out of things to sing about. This album brings nothing new to the table: there is the obligatory song about a girl (this time it’s “Amanda”), the cliché of sex, drugs, and violence (“Sex, Drugs, and Violence”, which title sounds oddly similar to Warning track “Blood, Sex, and Booze”), and an awkward effort to maintain their political relevance (“99 Revolutions”). Billie Joe Armstrong half-heartedly sings the words for us in the chorus of “Missing You”: “I’m missing you.” Indeed: we miss the old Green Day, those punk-rocking political pundits once so full of vitality and wit – where have they gone?

In fact the record doesn’t even sound much like punk rock at all. Literally every one of the 12 tracks has its own guitar solo – historically, and presently, not Billie’s forté – and they’ve all been so over-produced they’re like the iPad mini – does anyone really still care? Two of only three decent songs on the album are slower numbers: the ballad-like opener, “Brutal Love,” and a nostalgic little ditty, “Drama Queen.” Green Day have never sounded so lackluster, but then I suppose punk rock is more of a young man’s game. It’s a good thing they squeezed every penny out of American Idiot because it looks like they’re headed for an earlier-than-anticipated retirement.

But enough of my talk, I’ll let Billie Joe tell you in his own words. “Looks like it’s time to walk away” he sings on “Walk Away.” It’s almost as if he knows the end is near (or already here). He further expounds on “Little Boy Named Train:” “Where did you come from, where have you been / looks like you fell into the trash bin.” Amen.  Δ