In 1985, a four year-old girl from Hell’s Kitchen appeared in an episode of The Cosby Show.  Her role was small, and the experience brief. But this short sampling of the spotlight made a lasting impression on the young girl, who would dedicate her life to savoring it again. 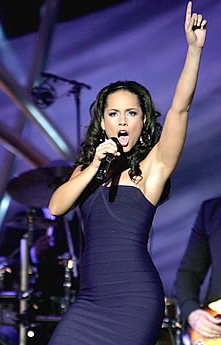 Career Highlight: 2002 5 Grammy-sweep (for Songs in A Minor)

Alicia Augello Cook was born on January 25, 1981. A single child, her first years were tempestuous ones; biracial parents Teresa and Craig often fought, and shortly after Alicia turned two, Craig walked out on them. Suddenly a single mom, Teresa dedicated herself to her daughter, working tirelessly as a paralegal and part time actress in order to provide her with every advantage she could afford. When seven year-old Alicia showed musical inclinations, Teresa paid for piano lessons. As her natural skill with the instrument (and music in general) became apparent, Teresa enrolled her daughter in the nearby Professional Performing Arts School, where Alicia majored in choir and began writing her own songs. Shortly after turning 16, she graduated, top of her class. Alicia had always been precocious, and now, although still a teenager, she was ready to launch her music career.

Alicia’s big break had come through a friend. She had met future manager Jeff Robinson through an after school program when she was just 13, and within a year he was sufficiently impressed to introduce her to Peter Edge, a top talent scout. Peter was floored: “I had never met a young R&B artist with that level of musicianship,” he would later say. He and Robinson helped Alicia develop demo material, and Columbia Records quickly snapped her up. (Alicia was accepted to Columbia University at around the same time, but after a few months dropped out to pursue music full-time.) When her professional recording, “Dah Dee Dah (Sexy Thing)” appeared on the soundtrack to 1997’s Men in Black, her career seemed set to take off. But corporate infighting and instability within Columbia caused delay after delay, and after two years with the label Alicia left, having never released so much as a note.

Discouraged, Alicia called Clive Davis, a longtime industry executive. He listened to her story and promptly signed her to his own label. Sensing a “special, unique” artist, he gave her full creative license and the resources she needed to release her first full studio album. Released in June 2001, Alecia Keys’ Songs in A Minor proved Davis right about the 20 year-old R&B singer: she was special. To date, the album has sold over 6 million units (6x platinum) domestically, and 12 million units worldwide; at the Grammy’s, Keys won five times.

Not one to rest on her laurels, Keys has toured and recorded steadily since 2001, following up her incredible debut with a string of critically and commercially successful albums.  All told, Keys has produced 5 studio releases, won 15 Grammy’s, and sold over 35 million albums (but who’s counting).

Her most recent release, Girl on Fire, is her first in three years (since 2009’s The Element of Freedom). Some of her fans were getting restive, apparently wondering how she hadn’t found time to hit the studio in between touring the world (263 stops to date), getting married (to rapper/producer Swizz Beatz), having a child (a boy, Egypt; her first, his fourth), producing and directing both a short film and a Broadway play (!), and designing a line of trainers for Reebok (which are selling fast). So far, the album doesn’t seem to be disappointing anyone; featuring Bruno Mars and Frank Ocean, among others, it is her fifth to debut at #1 overall.

Professionally, Keys has been described as mixing soul, blues, jazz, and classical styles into haunting melodies and hard-driving funk. She has been criticized for writing generic, clichéd lyrics to her songs, and lacking a clear artistic vision. But her contralto voice, which spans three full octaves, is universally admired for its impassioned inflection and raw power.

Personally, Keys has always been close to her mother (for whom she recently threw a massive 60th birthday bash), but in 2006 the singer made the decision to reach out to her estranged father. Seeing him attend to her terminally ill grandmother, she realized he wasn’t a bad person, and found a place in herself for forgiving and healing. “I would say in the process of growing up, you realize you’ve been holding on to anger,” she has admitted. “I was angry then and am sure I had the right to be angry, but if you hold on to all this anger the only person you’re hurting is you.”

In the spirit of making changes, Keys has recently parlayed her musical success into a burgeoning acting career, having appeared in three major Hollywood productions since 2006. She has also become more active philanthropically as of late, lending her star power to several Africa-focused non-profit organizations. Don’t expect her to spend too much time away from her music career in the near future though: the new mom has got 19 tour dates around the world (and counting), and the number one album in America.  Δ

Keys Trivia: Before manager Jeff Robinson suggested “Keys” (based on a dream he had), Alicia had decided on “Wilde” as her professional stage alias.