Life of Pi – the book – was supposed to be unfilmable: escape from a sinking cargo ship, floating carnivorous islands, flying fish, phosphorescent whales, and life at sea with an adult tiger.  But thanks to some clever CGI, equally clever filmmaking, and a $120 million budget, you can now watch the movie adaption at your local megaplex. 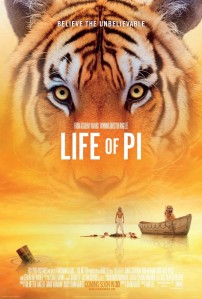 Synopsis – A young man who survives a disaster at sea is hurtled into an epic journey of adventure and discovery. While cast away, he forms an unexpected connection with another survivor … a fearsome Bengal tiger.  Trailer

The man who made it all happen, director Ang Lee, has become renowned for his ability to recreate spectacle on screen.  It was his film Crouching Tiger, Hidden Dragon (2000) which redefined the cinematically possible just over a decade ago.  With Pi, Lee has again given us an incredible visual feast.  Unfortunately the film – despite its best efforts – is little more than that.

The movie’s main character, Piscine Molitor Patel (Pi for short) is a young Indian born to a zookeeper father and a spiritualist mother.  As a boy, he develops a deep love for animals and a consuming interest in religion (he once describes himself as a “Hindu Catholic Jew”).  When economic uncertainty forces his family to pack up all their belongings (including the zoo’s living inventory) and sail for North America, Pi is heartbroken.  Or so we are told by adult Pi, living in Canada and relating his story to some sort of confused author/researcher/journalist (and, of course, to us).  Midway through the journey, a storm sinks the vessel, leaving Pi as the lone human survivor.  He is accompanied on a life raft by three noisy, agitated holdouts from below decks: a hyena, an orangutan, and a Bengal tiger.  Days and days, and days and days and days, of lonely ocean drifting ensue, punctuated by Pi’s attempts to fend off starvation and avoid being eaten alive.  He experiences various mysterious/rare natural phenomena, before finally washing up, on the brink of death, on a Mexican beach (spoiler alert!).

A daringly ambitious movie, Pi is nothing if not visually impressive.  But it tries to be more than that – it tries to be a message movie, providing the viewer with some sort of deep insight, or greater meaning.  Food for thought, at least.  But the film achieves none of that, due largely to its horrible bungling of the climactic tie-it-all-together denouement.  Better execution there could have turned Pi into a really compelling picture.  As is, it’s merely an enjoyable thrill ride.

Still, Ang Lee’s directing is, overall, fantastic, and stars Suraj Sharma and Irrfan Khan (both of whom play the same, title character) turn in admirable performances.  Rafe Spall (the awkward journalist) is, well, awkward, but all in all the on-screen performances are good enough, and Mychael Danna’s musical score is very good.

With little objectionable content, Pi is a worthy family film, and an enjoyable one.  Just don’t expect too much more than that.  Δ

One response to “review: life of pi”